5 Things To Know If You Go To Portugal


Our recent trip to Portugal only lasted six days, barely enough to scratch the surface of all there is to see, eat and drink in the compact country. We quickly learned not to speak Spanish – Lisbon residents speak excellent English and though many words are similar in writing, the languages are by no means interchangeable.

Here are a few other things to know if you go to Portugal:

1) All the national drinks

So many kinds of favorite drinks! Buckle up for some serious drinking if you go to Portugal, because there are a lot of national specialties to sample.
Port: Start with port, obviously, which comes in both white and red varieties and several degrees of aging. It’s not only consumed as an after-dinner drink – port and tonic is a popular aperitif.
Vinho verde: It means young wine, but actually it’s a wine region in the north of Portugal that was once known for its un-aged, naturally fermented wines. They’re apparently no longer naturally fermented and now sometimes aged as well, but either way the whites especially are incredibly refreshing with the country’s bounty of seafood and warm days.
Ginja: Neither gin nor ganja-related, it’s a sour cherry liqueur that packs a pretty good punch and also works well mixed with tonic and ice. It’s available pretty much everywhere, but the Time Out market in Lisbon has a popular ginja stall if you want to start there.
Gin: There are a few varieties of Portuguese gin but Portugal is in love with pretty much any kind. Fevertree tonic water comes in several varieties to pair with the various characteristics of different gins, and the Palacio Estoril hotel, where Ian Fleming used to hang out in the bar, serves a particularly delectable one in the country’s favorite large, bulbous glasses.
Capirinha vs. Capirao vs. Caipiroska: The cocktail list at most restaurants will include Brazilian favorite, the Capirinha, made with lime and the Brazilian cachaca spirit. For a Portuguese twist, try a Capirao instead, made with the sweet, herbal Portuguese liqueur Licor Beirao. The Caipiroska is made with vodka instead of cachaca. 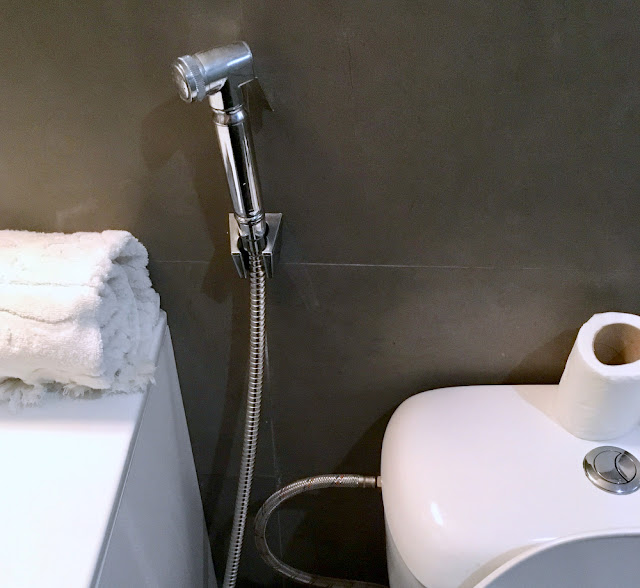 2)  The hose next to the toilet

“What’s the hose next to the toilet for?” I asked Matt. “Probably for hosing down the bathroom floor,” said my notably squeamish partner. Upon Googling, I had to inform him that is definitely not what it is for. It’s a Portuguese and Brazilian version of a bidet, and it’s actually required by law in all new construction like our renovated Airbnb bathroom.

3) How to order coffee

Six days wasn’t quite enough to nail my coffee order. The usual choices are espresso or coffee with milk (meia de leite), but that’s going to result in a pretty weak drink with a lot of milk with just one shot of espresso. It might have been easiest to order one coffee with milk and one espresso and combine them. But if you want to get more specific, here’s a guide to ordering coffee in Portugal. Although nata does also mean cream, just don’t order a coffee + nata unless you want an espresso and a pasteis, a common breakfast order that is a total bargain at around one euro.

The pasteis de nata –custard tarts – from Antigua Confeitaria de Belem are deservedly famous. It’s not necessary to get a table among the tour bus hordes, since the to-go line moves fast. But make sure to eat them while they’re still warm, possibly in the park across the street.
One of my favorites of the zillion of other pastries was the croissant integrale – a whole wheat croissant studded with seeds that gives you the slight impression of actually eating fiber, which is otherwise elusive when travelling.

Don’t forget to eat fruit and vegetables: Order whatever sides are available besides French fries, even if it’s only chickpeas. Stop at one of the fruit stands and get some of their terrific strawberries, or at a market if you don’t run across a stand. We liked the Mercado Figueria in Praca da Figueria, a convenient gourmet market with fresh fruit, a very reasonably-priced coffee and snack bar, and a selection of food gifts like salt and sardines.

In addition to traditional Portuguese food (At Cozinha da Felicade in the Time Out market, I had a traditional yet elevated dish of cod in a cream sauce olive dust and pennyroyal over sweet potato chips), make sure to try food from some former Portuguese colonies. Tentacoes de Goa has terrific vindaloo and other Indian dishes much spicier than most places in Europe. Just up the Beco Surradores stairs from there is Cantinho do Aziz. We didn’t have time to try it, but I’m sorry I didn’t get to try the cuisine of Mozambique for the first time.

5) Go to the places the tourists don’t go! Or go really early.

- Castle timing: Don’t skip the Castelo de Sao Jorge atop the hill above Mouraria and Alfama, which has an amazing view around the whole city, ancient ruins and a camera obscura. It’s not that hard of a walk, especially if you find the free Elevador Castelo that zips you partway up the hill. I recommend getting there between 9 and 10 am before the tour buses arrive, when it’s uncrowded, the greenery is freshly watered and the peacocks are wandering freely.

- Belem hack: Everyone goes to Belem for the famous custard tarts, the Tower of Belem and the monastery. The tram ticket is included if you have an all-day transit pass, but the tram was slow, hot and crowded. Instead try the train that leaves from Cais do Sodre station and whisks you to Belem in a few minutes. Just don’t try to board the train in Belem to return to Lisbon without a ticket, because you won’t be able to exit in Lisbon, as we found out when we had to appeal to a long-suffering station agent!

- We’re on a boat: Although the restaurants on the pier in Almada are shown on Phil Rosenthal’s “I’ll Have What Phil’s Having,” the package-tour folks are not that into taking a ferry across the river and walking 10 minutes along a semi-deserted warehouse street, despite its great street art. But it’s well worth it to sit in this semi-remote spot along the river watch the sun set, and although Ponto Final restaurant fills up fast, Atira-te ao Rio next door is also good.

- Little-known gem: We visited the Palace of the Marquises because James Bond film “On Her Majesty’s Secret Service” was filmed there. But the private villa is also known as the “Sistine Chapel of tile” and I’m so glad we were able to see the elaborate tile and mosiac work. Even if you miss the tour inside the villa, the gardens are worth seeing. The palace is an easy 15-minute walk from the Lisbon Zoo, which has its own metro stop, but few tourists seem to make the trip.

- Cascais by the sea: If you’re not exploring other beach towns, Cascais makes a nice day trip from Lisbon. The train (the same one that stops in Belem) takes around 45 minutes and although the charming port town is crowded with day-trippers, they seem like mostly locals. (If you haven’t figured out by now, I’m kind of allergic to tour buses.) We tried razor clams and giant red shrimp at the tranquil and classy Marisco Na Praca, which is upstairs in the marina and also at the Mercado da Vila.

But probably the most important thing to know is that we’ll definitely need to return another time to investigate all those wines some more and get that coffee order right!